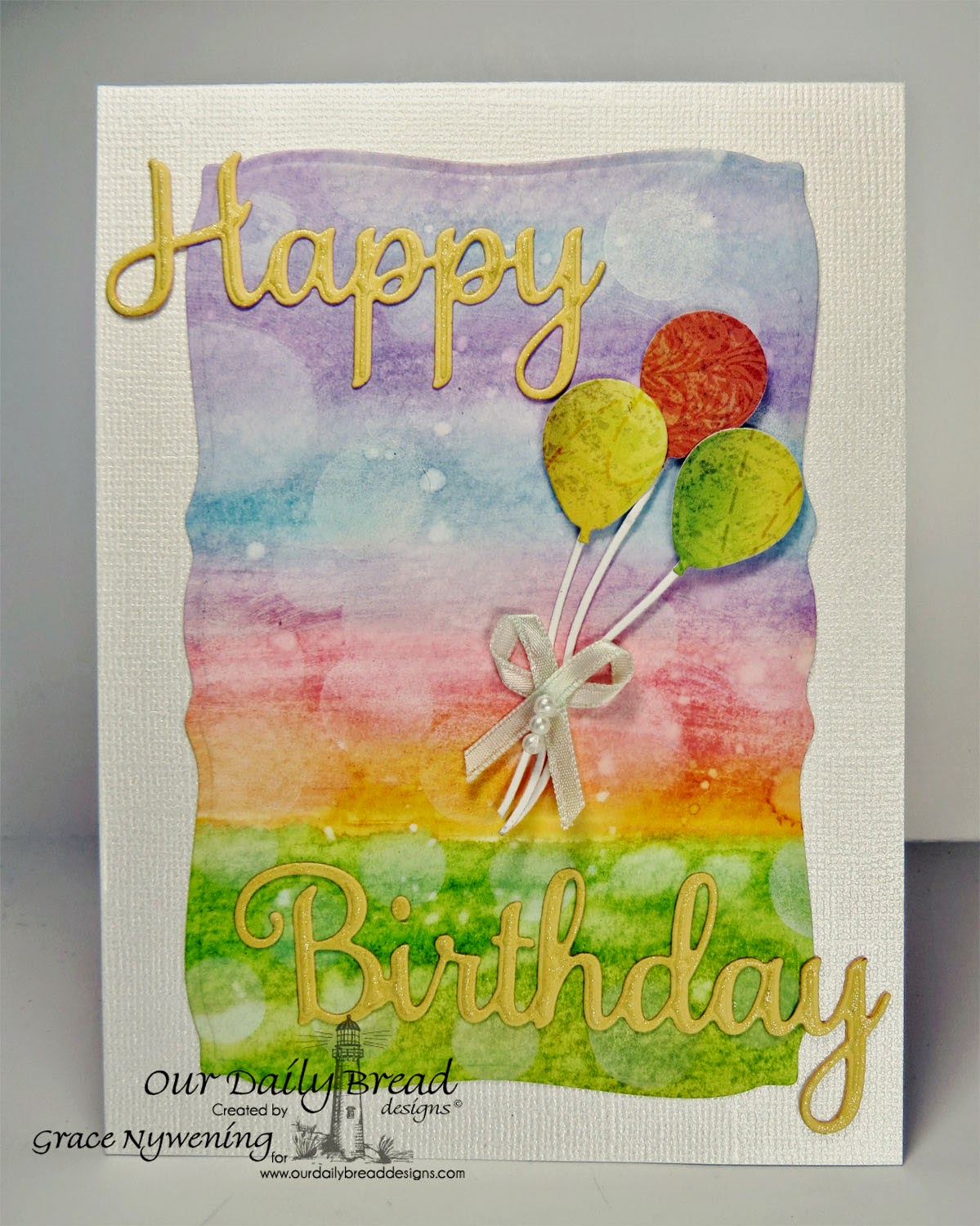 Hello  my friends!  It's been a while!  I hope everyone is doing well!

Today I'm sharing a sunny and bright Happy Birthday card I made using some fun new dies from Our Daily Bread designs, that will be released Feb. 1!  This  Happy Birthday die set is soooo fun to use and I thought this background that I had made earlier was the perfect "sunny" background for them.  To make it, I used watercolor paper (140 lb) and sponged on stripes of Distress Inks, then with a wet brush I blended them until I like the look.  I splattered some clean water on and then let it dry.  Once dry I used a hand made acetate stencil I had made by punching various sized circles from the acetate, and I sponged on white pigment ink in varying intensities to get that faux Bokeh effect.  I die cut the balloons from scraps of designer paper  from the ODBD Blooming Garden Collection, and the words from a scrap of So Saffron.  I cut the watercolor panel with a SB Curved Rectangle die and adhered to my white base, then adhered the various pieces.  The balloons themselves are popped up on dimensionals, and the letters are painted with clear Wink of Stella glitter pen. LOVE it but can't get a photo that shows the shimmer.

Anyway... keeping it short today, but here is God's Blessing from the Word for today:

Out of the depths I cry to  you oh Lord!
Oh Lord, hear my voice,
Let your ears be attentive to the voice of my pleas for mercy!

Posted by Grace at 8:53 AM 8 comments: Links to this post 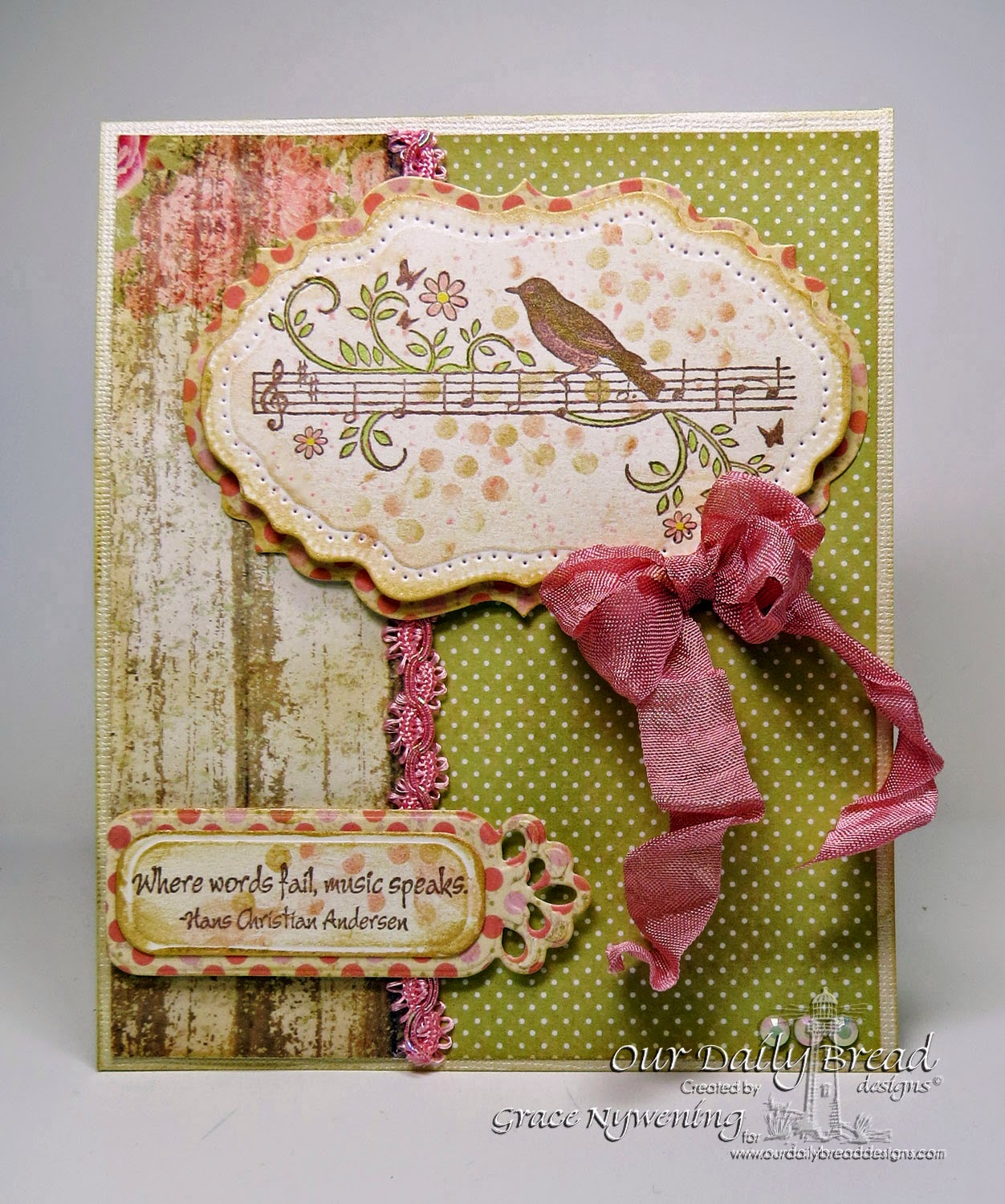 Hello my friends!  I hope you have all enjoyed a wonderful weekend and are staying well in this epidemic flu season!

Well we have been busy at our house, making repairs after a roof leak and laying new flooring in all our bedrooms!  We had planned on laying hardwood floors before the roof problem and had purchased the wood, but had waited to get started until my hubby was going to be off work for the week between Christmas and New Years.  So... while other workers were here doing other things like putting on a new roof, fixing dry wall inside, and painting, hubby and I have been hard at work getting the flooring down.  We have all the bedrooms done now except for the closets.   I'm loving the new look and I think it will really help with allergy symptoms, or I hope so at least!  :)

Anyway... with my SCS Dirty Dozen cards, and all the home projects, I have not had a lot of crafting time, but today I did manage to get in to my craft room for a little while, and this is what I came up with.  I used this month's Music Speaks stamp set, as well as the ODBD Blushing Rose Paper Collection, Vintage Labels, and Vintage Flourish Pattern Dies.  The trim is Recollections, and I used a Spellbinders Fancy Framed Tags die for my sentiment, and cut off one side of the fancy frame.  The image is stamped with Memento Rich Cocoa and then colored with pencils.  I then played around with the faux Bokeh technique found HERE.  I used Faber Castel Gelatos in pink and gold and the eraser on my mechanical pencil to stamp little circles on my background.  I used my finger dipped in the gold to add a touch of shimmer to the whole panel, and especially along the edges.  I also went over parts of the image with a Wink of Stella Clear Glitter Pen and I just wish the camera could capture shimmer because it never seems to really show it, especially on dark days like today!

Anyway... I love this new set and I had fun playing with something a little different for it.  I hope it inspires you in some way to have fun with different techniques too!

Today's Blessing from the Word:

Now may the God of hope fill you with all joy and peace in believing, that you may abound in hope by the power of the Holy Spirit.
Romans 15:13

Thanks so much for stopping by!

Posted by Grace at 4:37 PM 8 comments: Links to this post

The Ichthus and the passage of time! 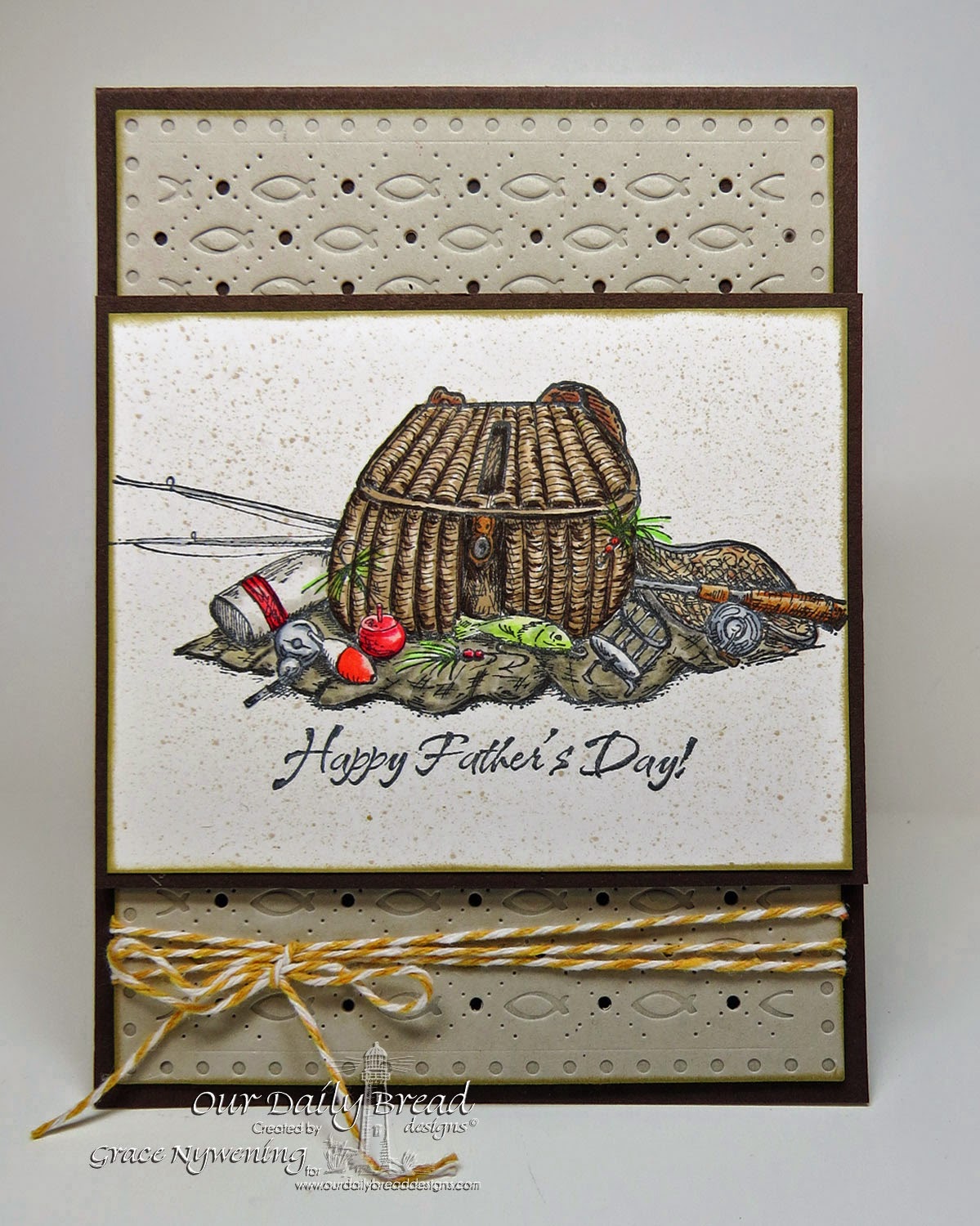 Well, with the speed of time, we realize that things creep up on us!  With that in mind, when I was thinking about what samples I could make for you using the newly released ODBD Faithful Fish Pattern Die and Debossing Plate.  The first thing that came to my mind was the retired set, Fishers of Men, which was one of my first sets purchased from ODBD!  The set has been retired, but the Fishing Basket Image is still available as a single stamp!  You can find it HERE.

I love this image for all the guys in my family because they all love to fish!  So I decided to pair the image with a Happy Father's Day sentiment from The Waves on the Sea and make a Father's Day card up early to have ready in June.... which will be here before I know it!!!

I started with a base of Early Espresso and then used Sahara Sand to die cut and deboss the Faithful Fish Pattern Die and Debossing plate.  I stamped the image with Memento ink and colored with Copics.  I added some baker's twine and splattered some ink on my image panel with a tooth brush and reinker.  Very simple, very quick!  Since time is flying by so quickly, being able to create a few cards quickly seems to be an expedient thing to do right now! :)

I'm sure most of you know the basic history of the "Jesus Fish" but if not, here is what Wikipedia says about it.

The ichthys or ichthus (/ˈɪkθəs/), from the Greek ikhthýs (ἰχθύς, "fish"), is a symbol consisting of two intersecting arcs, the ends of the right side extending beyond the meeting point so as to resemble the profile of a fish. It was used by early Christians as a secret Christian symbol and now known colloquially as the "sign of the fish" or the "Jesus fish".

According to tradition, ancient Christians, during their persecution by the Roman Empire in the first few centuries after Christ, used the fish symbol to mark meeting places and tombs, or to distinguish friends from foes:
According to one ancient story, when a Christian met a stranger in the road, the Christian sometimes drew one arc of the simple fish outline in the dirt. If the stranger drew the other arc, both believers knew they were in good company. Current bumper-sticker and business-card uses of the fish hearken back to this practice.

I had a Jesus Fish on my car for a while, just as a testimony that I belong to Christ.  One day I parked my car in front of AC Moore and someone stole my fish!  Lol!  I guess they either were enraged by it, or maybe just kids being mean but you have to admit.... that's one thing you don't expect to be stolen!  Well I hope it's doing some good somewhere!  :)

Anyway... thinking about time flying by.... and thinking about Jesus' command to "Come follow me and I will make you fishers of men"... I am reminded that time is indeed short, and our entire lives fly by!  Even if we live an incredibly long life, humanly speaking, our days are still short!  It's important to keep eternity in view at all times, and to use our time wisely!

Thanks for stopping by today and for taking the time to read my rambling thoughts!  I wish each of you a blessed New Year, filled with meaningful times.... meaningful days, meaningful moments!

Welcome to the ODBD January Release! 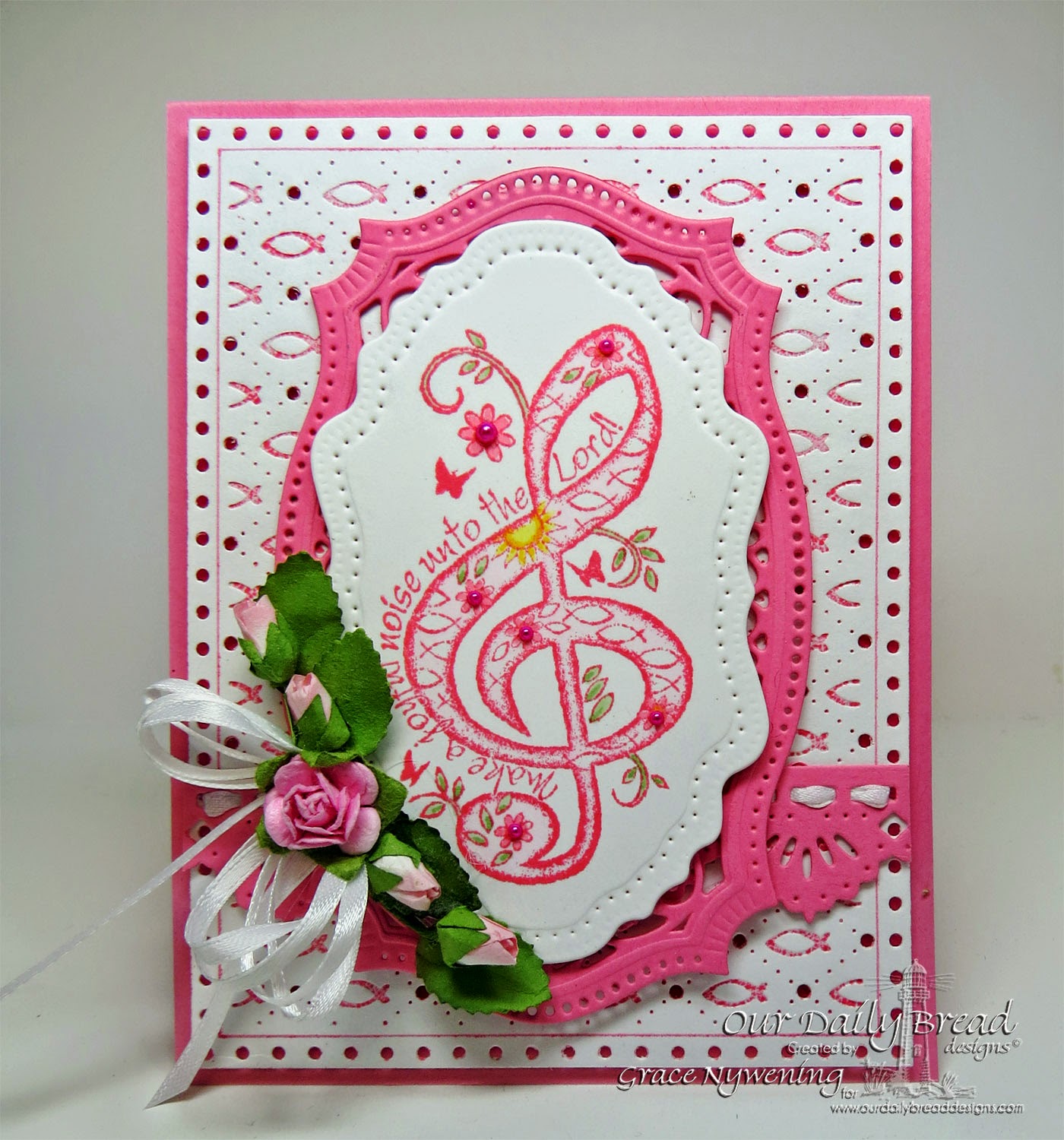 If you didn't see the entire release,  you might want to begin at the ODBD Blog.
To be eligible to win one of THREE prizes of $25.00 Gift Certificates to be used toward the purchase of stamps at the ODBD Store, simply leave a comment on each of the designers blogs by Jan. 2, 2015, 9:00pm EST.  Three winners will be randomly chosen from comments on the designers blogs and the winners will be announced on the ODBD Blog on Jan. 3rd. Be sure to check back there to see if you won!

Now on to my cards:

For the above card, I used Just a Note, and Faithful Fish Pattern Die, as well as previous releases: Vintage Flourish Pattern Die and Beautiful Borders.  I began with a Regal Rose base top fold A2 card.  For my background, I inked my fish pattern die with Worn Lipstick Distress ink before running it through my die cut machine.  This put a little color in to the debossed pattern. Please note:  This die is designed to deboss the fish and the dots around the outside border of the die, but I passed mine through the machine several times and then simply pierced my border holes out.  I like the way it looks this way!  I popped the fish pattern up with dimensionals, then added the pink Beautiful Border which I laced up with 1/8" ribbon.  I popped up the image on the mat and mounted that on top of the fish pattern.  I stamped the image with Worn Lipstick Distress Ink and then colored it lightly with Copics.  I cut the panel with the Vintage Flourish Pattern die and popped that up with dimensionals on  a Spellbinders Majestic Label Twenty Five.

For my next sample, I went from fairly clean to shabby and distressed. 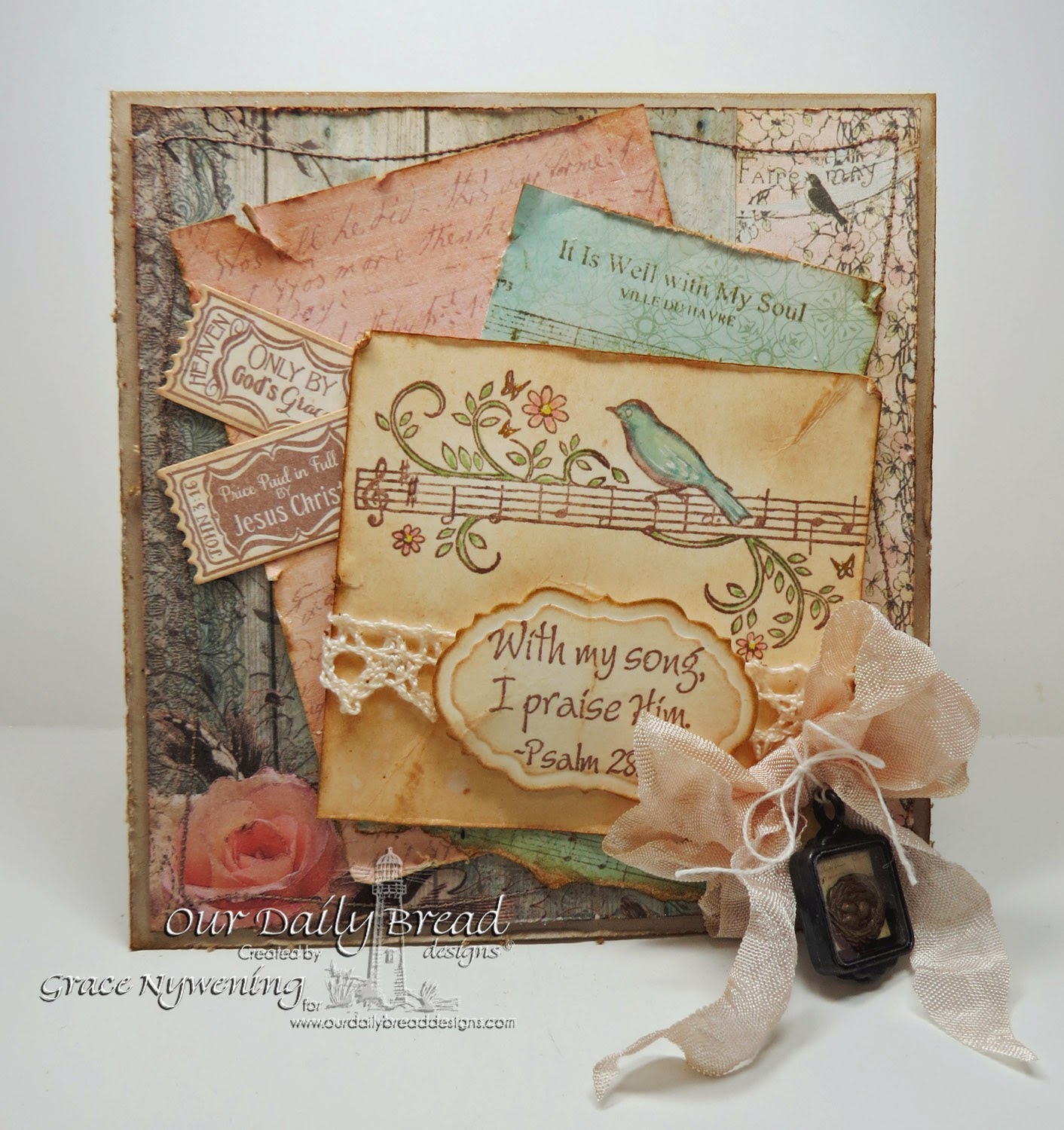 For this card, I used  Music Speaks for my image and sentiment.  I stamped with brown Memento ink white card stock, and colored with Copics, then I distressed edges, crumpled up a few wrinkles and sponged with various distress inks.  The sentiment is cut with a Vintage Label, and distressed, then popped up on dimensionals over the lace trim.  The card base is Baked Brown Sugar, and the designer paper is g.c.d.studios - Botanique.  I used a scrap of blue designer paper and lightly stamped the It Is Well With My Soul Hymn Background with Distress ink.  I layered up my papers and decided to tuck in two of last month's tickets from Admit Three, and cut them with the ticket die in the Mini Tags Die set.  I did my first "wandering" stitch technique on this card and I wanted to go a second time around but my machine was not liking this paper and I was afraid I'd ruin it, so I stuck to just one row of wandering stitches.  My wrinkled seam binding also anchors a little bird's nest charm from Prima.

Thanks so much for visiting today!  Please stop by my DT sisters' Blogs to view all the inspiration they have to share with you! 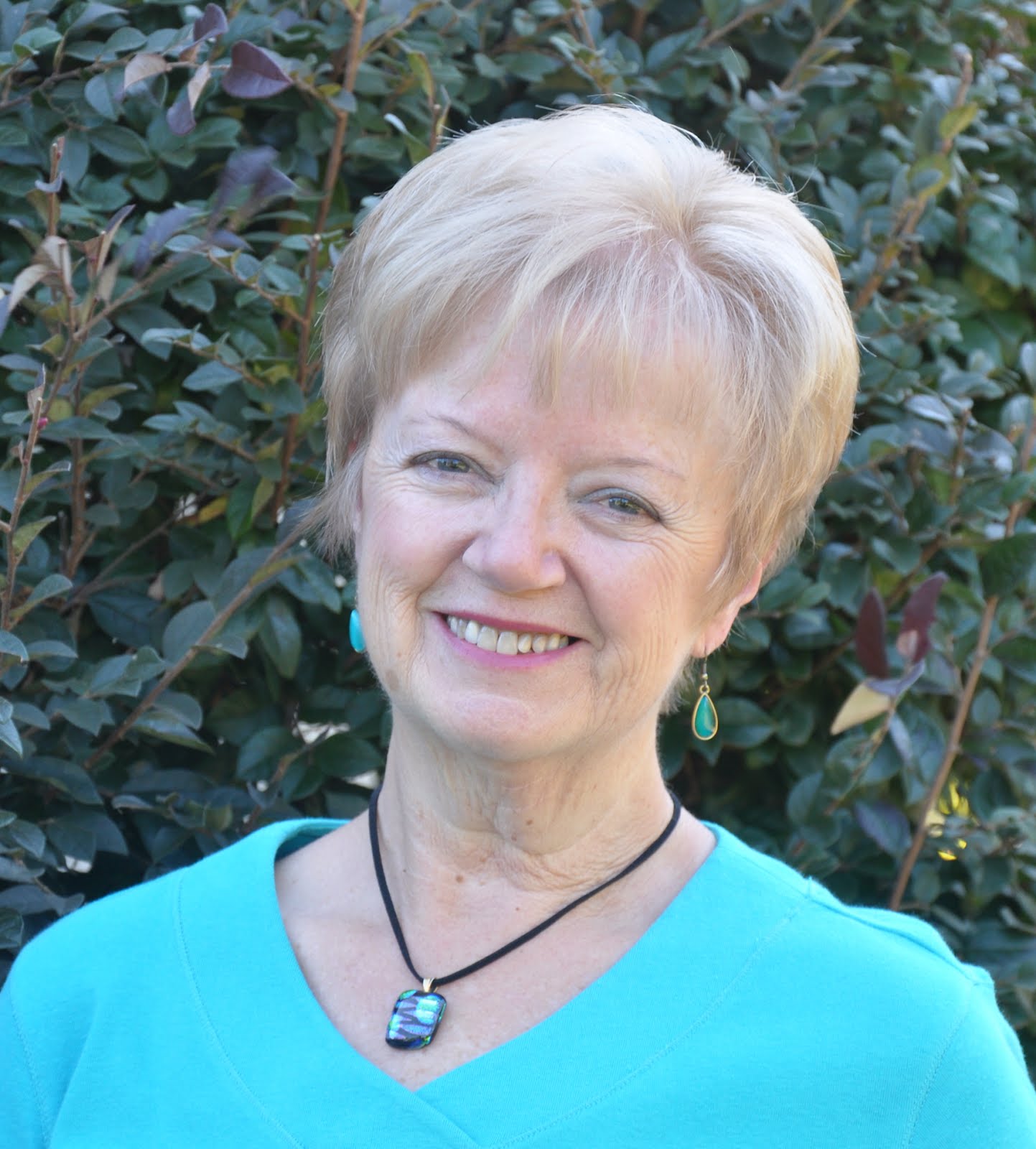 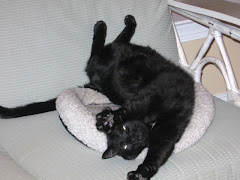 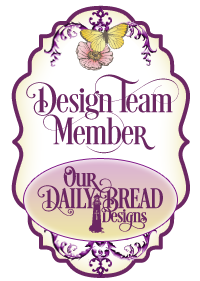 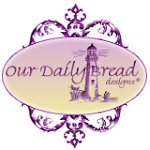 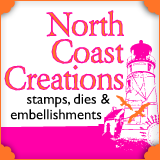 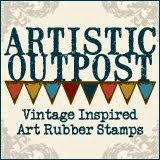